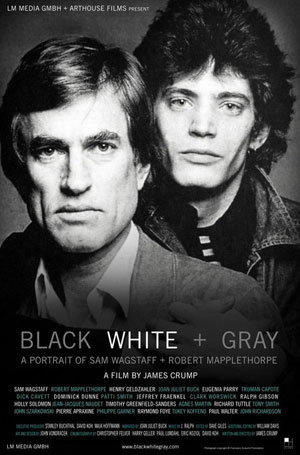 More information, including film clips, is available at blackwhitegray.com

Written, produced and directed by James Crump Black White + Gray meditates on Sam Wagstaff’s
life journey and his transformation through shared passion and experience with Robert Mapplethorpe.
It shows how Wagstaff found his role as a collector of photography and through Mapplethorpe was
enabled to visit and unlock parts of his true self. It likewise gives new dimension to Mapplethorpe and
his role inspiring Wagstaff in his early collecting of photographs. The film demonstrates the symbiotic
bond that grew out of a chance encounter in 1972 and how the work of both men continues to
resonate today. When Wagstaff and Mapplethorpe made their first discoveries and triumphs in the
medium, photography didn’t enjoy its present status nor the hyperbolic values now being realized at
auction. They would be amused by their influence, which continues to play itself out in the art world.