The midcentury community that fell for Marcel Breuer Link

When Modernism Made a Home in the U.S. Link

“James Crump, the intrepid director, writer, and art historian, has done the impossible, crafting a smart, serious architecture documentary that isn’t hopelessly dry and boring. His latest film, Breuer’s Bohemia, takes an incisive look into the roiling cultural milieu in which Marcel Breuer crafted some of his most groundbreaking residential projects. It is a tale of inspiration and decadence, rife with heavy drinking and free love, all set against a backdrop of leftist politics and social iconoclasm incubated in the seemingly staid suburban outposts of Connecticut and Massachusetts.” Link

Looking for the Unexpected: A Portrait of James Crump. Link (PDF)

WSJ Magazine asks six luminaries to weigh in on a single topic. This month: Fulfillment 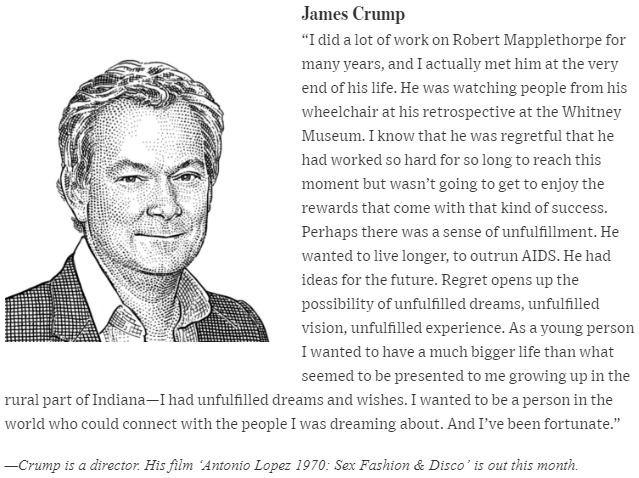 Bill Cunningham once streaked in front of Jerry Hall. Link

Vividly renders the look and feel of a bittersweet and all-too-brief era that would shape so much of the future of fashion…Pulsates with rare film clips. Link

‘Troublemakers: The Story of Land Art’ The writer and director James Crump’s cogent, brisk survey of a group of American artists using the environment as their medium is worth seeing on the biggest screen possible for its generous views of sprawling pieces like the legendary “Spiral Jetty” by Robert Smithson. (Glenn Kenny) Link

“Luckily, this fall, art historian, documentary director, and erstwhile museum curator James Crump offers a thrilling and revealing look at the creators and myths of land art with his film Troublemakers. Through archive footage and extended interviews, Crump masterfully captures the why and how of these sacred terrestrial forms… Crump also brings the outer world to the inner circles, positioning the movement in light of metaphysics, science fiction, growing ecological concerns, a trend toward “anti-people” art, and even the invention of the airplane and the exploration of outer space.”
August 2015 Link

“James Welling: Monograph is a sensationally attractive book. It was published to coincide with a large survey exhibition of the artist’s work from the 1970s through 2012 that opened at the Cincinnati Art Museum and traveled to the Hammer Museum in Los Angeles, where I caught up with it. The main text by James Crump is an exemplary account of Welling’s career to date. It proceeds in chronological order, series by series, with unflagging intelligence and critical acumen. Not only does Crump do justice to the critical literature, but time and again he contributes new information about Welling’s practice based on extensive conversations with the artist and provides insights into the work that even the most informed and sophisticated reader can only be grateful for.”

“James Welling: Monograph, curated by James Crump. This ambitious career survey, comprising nearly
two hundred photographs taken between 1975 and today, will be accompanied by a book with contributions
from Crump, Mark Godfrey, Eva Respini, and Thomas Seelig and promises to give a thorough picture of the
artist’s wide-ranging achievements.” Link

“Drawn chiefly from a largely unseen private collection, and curated by the ever–inventive James Crump, the
Cincinnati Art Museum’s Decade by Decade, is the first exhibition spanning Evans’s work from every decade…” Link

“James Crump’s documentary, Black White + Gray: A Portrait of Sam Wagstaff and Robert Mapplethorpe,
is a potent exercise in art-world mythography that might be nicknamed ‘The Prince and the Punk.’” Link

“James Crump’s fascinating documentary, Black White + Gray aims to redress that imbalance by providing
a vivid portrait of Wagstaff, largely through interviews with his surviving friends and colleagues, but even more
tellingly through the photographs that he amassed.’” Link

“Suffering the Ideal is a welcome rehabilitation, and James Crump’s introduction to F. Holland Day makes a fair
case for Day as a serious-minded interpreter of male beauty and as a skillful portraitist.” Link

“It’s an incredible, generous, meaningful gift, especially for L.A., considering he wasn’t a West Coast photographer,”
said James Crump, who made a documentary about Mapplethorpe and his mentor/lover Sam Wagstaff… “It’s one
of the largest single artist gifts I’m aware of in the last decade. It’s a coup for both LACMA and the Getty.” Link
(Asked to comment on the joint acquisition of the Mapplethorpe archive by the Los Angeles County Museum
of Art and the J. Paul Getty Trust.)